WHY TITHING IS SO IMPORTANT

According to George Barna’s research, Just 6% of born again households tithed to their church in 2002. How sad!

I remember a conversation I had with a friend in college. He was a member of the "Church of Christ, Scientist" (This was before I was a Christian and I didn't know it was a cult.) He had a serious girl friend and was sleeping with her. He told me that he believed it was OK because it was important that they were "compatible in bed." I was shocked to hear this from him. I remember thinking to myself - "He's a Christian and that's not what the bible teaches!" I had enough Bible teaching to know that that was not God's way!

Am I condemning this friend or anyone else who is self deceived in this, or any other area? NO! But my point is- most Christians judge themselves by those around them, or their own ideas, rather than by God's word.

God’s word is very clear on sex outside of marriage, prejudice, pride, gossip, tithing, and much more!

Surveys have shown that 19% of born again adults have a biblical worldview. And only 50% of all Christians firmly believe that the Bible is totally accurate. If we don't believe the teachings of God's word - we are basically making it up as we go along. And guess what - my flesh will always interpret things in my favor. My rules will always tend to justify my sin! Funny how it works that way…

God understands the danger of gold (“stuff”). He understands that it easily deceives our hearts and ends up being worshiped. I believe that is why He instituted the tithe. The tithe makes it clear to us where our heart is on this matter.

I believe tithing is simply God's principle of proof of ownership! The big question is – Whose money is it? And the biblical answer is – It is all God’s! Hag.2:8, “‘The silver is Mine, and the gold is Mine,’ says the LORD of hosts.”

We are stewards who have been entrusted with some of what belongs to God. And the way He asks us to acknowledge this is through worshiping Him and giving Him the first 10% back - joyfully.

God asks His children to worship Him with a tithe (tenth) of their increase. If I can joyfully take the first 10 % of my increase (pay check, government check, etc.) and give that back to God, I am making a statement that I am truly a steward of what He has entrusted me with. And since I am doing this joyfully, it also proves He, not money, is on the throne in my heart. Luke 16:10-13 says- “If you are faithful in little things, you will be faithful in large ones. But if you are dishonest in little things, you won’t be honest with greater responsibilities. And if you are untrustworthy about worldly wealth, who will trust you with the true riches of heaven? And if you are not faithful with other people’s things, why should you be trusted with things of your own? No one can serve two masters. For you will hate one and love the other; you will be devoted to one and despise the other. You cannot serve both God and money.”

If I give my tithes, with a sad heart - maybe thinking about the new car I could be driving if I didn't have to give God so much money - then I am not truly tithing to Him. (He looks at the heart not the hand.) He only receives gifts given joyfully from a willing heart. The church, or other Christian organization, will receive my gift and they will hopefully use it for the Kingdom. But God will not receive it if it is not freely and joyfully given. We don’t want our tithe to stop here we want it to also rise before God as a sweet, sweet, fragrance!

Where should my tithe go? In the Old Testament it was always given to the priests for their support and for the temple – which was the dwelling place of God. In the New Testament we are not given a lot of specific instructions. We do see ministers receiving offerings:

I Tim.5:17-18, "Let the elders who rule well be counted worthy of double honor, especially those who labor in the word and doctrine. For the Scripture says, "You shall not muzzle an ox while it treads out the grain," and, "The laborer is worthy of his wages."

Elders are Christian leaders - apostles, prophets, evangelists, pastors and teachers. These can be men or women leading local churches or pare church organizations.

I believe we are to give tithes where we are being fed! For most believers this is primarily the local church. But God could speak to a person to give part of their tithe to a pare-church organization that has been instrumental in their Christian growth.

In the case of Kathy and me, we give 100% of our tithe to our local church (And we did that for years before I was a pastor). Then, beyond that 10%, we give offerings to our church and to pare-church organizations, and missionaries that God leads us to support. And we give alms to the poor as God leads.

The Bible talks about tithes, offerings and alms. It should all be joyfully done as a beautiful form of worship!

What if one struggles with releasing the money to God and they keep it all and use it for their families needs? They may say something like: "After all we don't have extra money and I believe God understands my position." I would say, first, and unfortunately, one who does this is in the majority today, as most Christians don't tithe. But second, I would say- they are robbing God of what is truly His and are robbing themselves of much more.

Mal.3:8 (God speaking), “Should people cheat God? Yet you have cheated Me! But you ask, ‘What do you mean? When did we ever cheat You?’ You have cheated Me of the tithes and offerings due to Me.”

Kathy and I have tithed for many years and we tithe off the top. We can’t tithe before the government takes their part but when we get a pay check we write a tithe check off of the gross amount of the check, not the net paid to us. By tithing off the gross we feel like we are putting God first. And we do it with joy!

When Kathy and I first heard about tithing we were new Christians and were already spending more than we were making each month (our credit card debt was slowly rising). So we could not just start giving God 10%. But we heard the teachings and believed they were true and we determined that we would be tithers. By the end of the first year we were giving God about ~5% of our net income. By the end of the second year we were giving God 10% of our net income. By the end of the third year we were worshiping God with 10% of our gross income. And we did not stop there. Through our tithes, offerings and alms giving, we always go beyond 10% - and wish we could give much more. We don’t do this to “look good.” We don’t do it out some dreadful fear of what might happen if we didn’t do it. We do it out of love and to honor our great God!

A person must first get the revelation that all that they have is really not theirs - it is God's. He graciously gives all - but then asks for 10% back. And when we understand His deep love for us and the unimaginable sacrifice Jesus Christ made for us - we can joyfully become true tither’s!

When a person can joyfully release their tithe, with no strings attached, they have taken a huge leap in the direction of intimacy with God - because now they have released their stuff to Him - so their stuff no longer rules them.

Luke 12:15-21, “And He said to them, "Take heed and beware of covetousness, for one’s life does not consist in the abundance of the things he possesses. Then He spoke a parable to them, saying: The ground of a certain rich man yielded plentifully. And he thought within himself, saying, ‘What shall I do, since I have no room to store my crops?’ So he said, ‘I will do this: I will pull down my barns and build greater, and there I will store all my crops and my goods. And I will say to my soul, ‘Soul, you have many goods laid up for many years; take your ease; eat, drink, and be merry.’ But God said to him, ‘Fool! This night your soul will be required of you; then whose will those things be which you have provided?’ So is he who lays up treasure for himself, and is not rich toward God."

No one will ever be forced to give to this church. My purpose in writing this is to encourage you to consider the tithe. Consider why God established it and what it means to Him. And hopefully, if you don’t already have it, you will get a revelation of it and get excited to start giving Him what is rightfully His – with great joy!
Posted by Tom Steinen at 11:54 AM 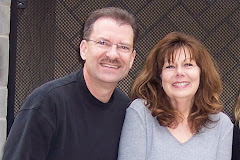 Tom Steinen
Searcy, Arkansas, United States
I am a follower of Christ with a passion to know Him more intimately. I am one of the most blessed men in the world - to be a child of God, to be married to Kathy and to have a wonderful daughter, son in law and two precious grandsons. And to be called pastor of a local expression of the body of Christ (Agape Church of White County- my church family)! www.agapechurch.com